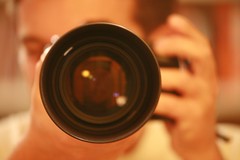 CC Self portrait with camera by Bruno Girin at Flickr

In this project, we made a short film covering a small section of a previously recorded conversation. We used the script from our Dialogue in a Screenplay, and recreated the conversation, keeping in mind blocking and camera positioning. The goal of this project was to understand blocking, and how it affects the audiences experience.

The Five Stages of Blocking a Scene 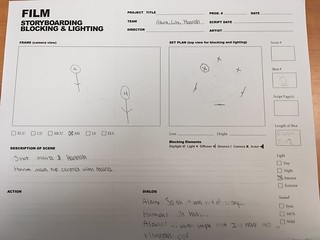 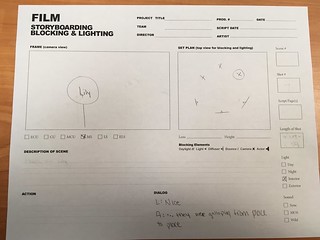 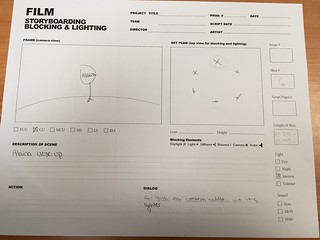 In this project, we were meant to make specific choices about blocking. The first choice we made was to put me in the center of the three of us. We chose this because I was answering questions from Hannah and Lily, and steering the conversation. Another choice we made was having Hannah cross her arms over herself. Crossing her arms was a weak movement that showed that she was feeling unconfident or nervous. We also used three cameras, that way we could have a camera focused on each of us while we spoke. This way, while each of us talked, we could switch the shots to show us each respectively.

Throughout this project, I learned a lot about both editing and blocking. I learned about how people’s physical signals and positions change how the audience sees the scene. I also learned how to edit using multiple cameras. At first, my camera switches were slow and the audio wasn’t matching up, but using a video tutorial I was able to figure out how to smoothly edit my clips under one audio.